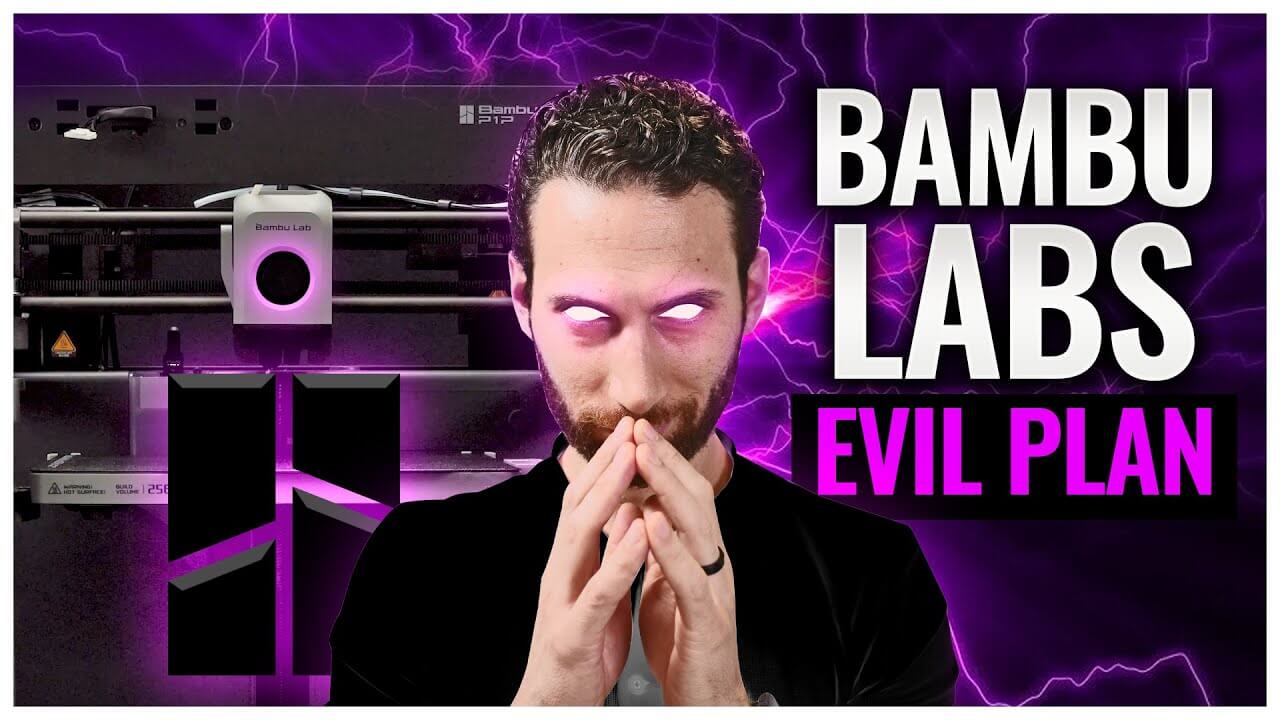 I figured it out, you guys. I figured out Bambu Lab’s secret plan for global domination

In this article, I’m going to share what I think it is, and what it means for the next decade of 3D printing.

Without question, the biggest 3D printing news of 2022, if not of the last 5 years, was the massive splash of Bambu Lab onto the scene, with their X1 Carbon.

This printer took the world by storm, and had even the most die-hard Voron and Prusa acolytes genuinely blown away.

The printer was a quantum leap forward in consumer 3D printing, And yet, it came from an upstart – a new company that literally nobody had heard of a year ago. A company that was actually able to deliver on preorders, with an end product that genuinely delivered on it’s promises.

I’ve spoken to a lot of people in the industry over the last few months, especially when the even lower-priced Bambu Lab P1P came out, and all of them said the same thing: “I don’t understand how they can sell this printer, with these features, for this price. They must be losing money.”

And that’s when it hit me. I realized exactly what Bambu Lab is doing, and it’s a playbook that has worked time and time again – by brilliant entrepreneurs all the way up to Elon Musk.

In fact, I think that Bambu Lab is using the same strategy as Tesla, Bugatti, and McLaren.

Create a top-level product with insane performance and innovative technology for only the select few people who can afford it. Sell it at cost, or even at a loss.

Remember the original Tesla Roadster? A $120,000+, super-impractical sports car with impressive speeds? As Elon himself admitted, this car was created for three purposes only: to get Tesla’s name out there, to ramp up production, and to raise money for the next car.

Or how about the Bugatti Veyron – the car that broke the world record for top speed of a production car. Like the X1 carbon, it made lots of waves – and headlines, when this unknown company resprung from the ashes and was beating out the established players like Ferrari and Lamborghini.

What most people don’t realize is that Volkswagen, the parent company of Bugatti, actually LOST $6.25 MILLION on every Veyron they sold, despite it’s $1.2M price tag.

That amounts to a $2.3 BILLION loss, all in the name of scaling, marketing, and brand reputation.

Mclaren, makers of the legendary F1, stopped selling cars altogether for over a decade, producing just 108 cars in total.

That’s right, friends. I’m going to come right out and say it. I suspect that Bambu Lab is, or at least was, LOSING MONEY on the X1 Series.

I’m fairly confident that they have raised a tremendous amount of money, enough that they can afford to lose it on every printer they sell.

Fortunately, the story doesn’t end there for any of these companies. It’s just the first step in their strategy.

Bask in the glory, the insane amount of press coverage, and the buzz of respected industry insiders talking about the product and its category shifting performance. Let people wonder how you can afford to do it for that price.

Whether it was the Bugatti Veyron, the McLaren F1, or the Bambu Lab X1 Carbon, we’ve all seen the reviews.

We’ve seen the Jeremy Clarksons of the world remark at how ridiculously fast the Veyron is, with high-budget spectacles on Top Gear to test out it’s top speed.

We’ve also seen how every influencer in the 3D printing space who has one has basically shifted to the X1 Carbon as their daily driver printer.

Basically, the X1 was ALL that anyone could talk about, and every voice we trust has already given it the green light…

Meanwhile, the company is losing money on every unit, or at least the initial ones, but they are gaining more publicity, brand awareness, and reputation than money can buy.

Re-invest ALL of the money you’ve brought in into R&D to develop your next products.

Leveraging your reputation, you can now go in two different directions: ultra high end, like the Bugatti Chiron, or more mass-market versions of your initial product, which will be less costly, because you’ll use the tools, facilities, knowledge, and even many of the same parts and R&D, in the next version.

If you go in this direction, you will use the economies of scale to drive down cost, while using the benefits of your now extremely valuable reputation to charge more than a new entrant could in the market.

Plus, you can strip out some of the unnecessary bells and whistles that the average consumer won’t need.

In other words, bring down your cost to produce the product, while trading on your brand recognition to sell a mid-market or upper-mid-market product. (Obviously, at this point, you’re already turning a profit).

And by the way, while Bugatti chose to only go in one direction, selling insane one-off cars and $2-4M Chirons, you don’t necessarily have to choose just one direction.

In the case of McLaren, they started selling both the “hypercar” types of cars like P1’s, Sennas, and Eva’s to ultra wealthy people like Billionaires, and “normal” supercars like the GT, 670s, 765’s, and so on to people who are just low-key rich AF.

Rinse and repeat steps 3 and 4 until you are beating even the most established manufacturers at their own game, whether that is the higher-end or the lower end, by selling a HIGHER quality product at the same price or less than your competitors can afford to sell for.

Leverage the technological lead you’ve established by having so many of your next-generation products in use worldwide, that nobody can catch up to you.

In the higher end case, this is exactly what Bugatti has done with the Chiron.

Whereas, in the past, the only game in town for hypercars were special edition Ferraris, today, Bugatti dominates a huge portion of that market segment.

In the mass-market case, this is precisely what McLaren, and to an even larger extent, Tesla, have done.

15 years ago, if you wanted a nice car, you probably bought a BMW, Audi, Mercedes, or Cadillac. Who had heard of Tesla (or Bambu Lab?).

Today, however, the little upstart Tesla makes 4 out of the top 6 selling electric cars in America, beating out all of these companies and more:

Similarly, McLaren announced back in 2019 that they were hitting record sales, increasing by almost 50% per year!

And honestly, are you surprised?

These companies, companies like Tesla, are not winning because their products are cheaper.

They’re winning because they have innovative technology, whether that’s full self driving mode, advanced electric power trains, improved safety systems, or other bells and whistles, for the same or less than their established competitors.

Tesla, for example, has millions of hours of data with which to improve their autopilot systems, and over a decade of experience in producing efficient electric drivetrains, neither of which Mercedes or BMW can even come close to.

This makes Tesla’s products not only desirable, but much more trendy, And just an overall better deal for the consumer.

When faced with two choices: one that is the “established” player, the type of brand your mom or dad dreamt of buying, but has fewer features and costs slightly more, or the new, trendy upstart with more features at a better price.

Which are you going to choose?

How much is brand history and reputation really worth to you, especially when the “upstart” company’s recent reputation has been almost nothing but slam dunks?

And that, my friends, brings us to…

Dominate the market, and expand from there.

With your superior products, and your ability to sell them at the same or lower prices as your established competitors, people are going to be lining up to buy your products, so you’d better be reinvesting a lot of the very considerable profits you’re making into building new factories and scaling up production.

Keep your foot on the gas, if you can.

Your goal is now to “roll out” your products to anyone who wants them, and let’s face it, thanks to the previous 4 steps, that’s pretty much everyone.

At this point, your competitors are in your rear-view mirror. That little issue you had about being an unknown upstart with no brand reputation?

Nobody’s talking about that anymore. You’re the man now, dog!

Oh, and all that money you “lost” in the beginning, selling your premium product at a loss? You’ve more than made up for it.

In fact, you’re not only profitable on your newer, mid-market products, but your economies of scale now mean that you’re profitable on all of your products.

Now, it’s time to take all of these advantages you’ve built for yourself, and tackle the next challenge.

Look on your competitor’s plate, and see what other goodies they have that you can snatch away.

Maybe you go after the B2B market. Or the niche high-end luxury market.

Or what about new competitors, who serve other wildly popular market niches you haven’t even begun to explore?

At this point, you can stop at nothing short of world domination…

Where Are We Now?

And with the release of the P1P, their “lower cost” but still upper-mid-market product, they will sell out, obliterating the other competitors in that price point such as the Prusa MK3S+.

This will put their product in more hands, and further quiet any concerns about reputation, longevity, reliability, and so on.

Most likely, we’ll see Bambu Lab producing a $250-300 “mass market’ printer in the next couple of years, as they rinse and repeat Steps 3 and 4.

This printer will not have the performance of, say, the X1 or the P1P, but it will leverage the learning, R&D, and parts from those products to still beat out the other competitors in that price range by a wide margin.

Bambu may do a couple iterations on this, for example, dropping their next printer down to only $400 or $500 first, until they’ve adequately conquered the market one segment at a time.

Depending on when that happens, we will likely also see a “higher end” Bambu printer at some point, for example with a larger print volume – though for now, I suspect that the X1 is going to remain the top of the line.

Suffice it to say, if I were a company like Creality, who is very good at mass producing products, but has never been all that good at moving the innovation needle, I’d be shaking in my boots about Bambu Lab reaching Step 5.

If I worked at Prusa, on the other hand, I’d either be frantically working on revamping whatever is planned for the Prusa XL and the MK4, or be polishing up my C.V.

One way or another, we as consumers are going to be getting MUCH better printers, MUCH cheaper, and that’s a win!

Jonathan Levi is a bestselling author, serial entrepreneur, and thought leader on the topics of 3D Printing, accelerated learning, personal development, online education and entrepreneurship. His popular online courses, podcasts, YouTube channels, and books have been enjoyed by over half a million people in all 205 countries and territories.